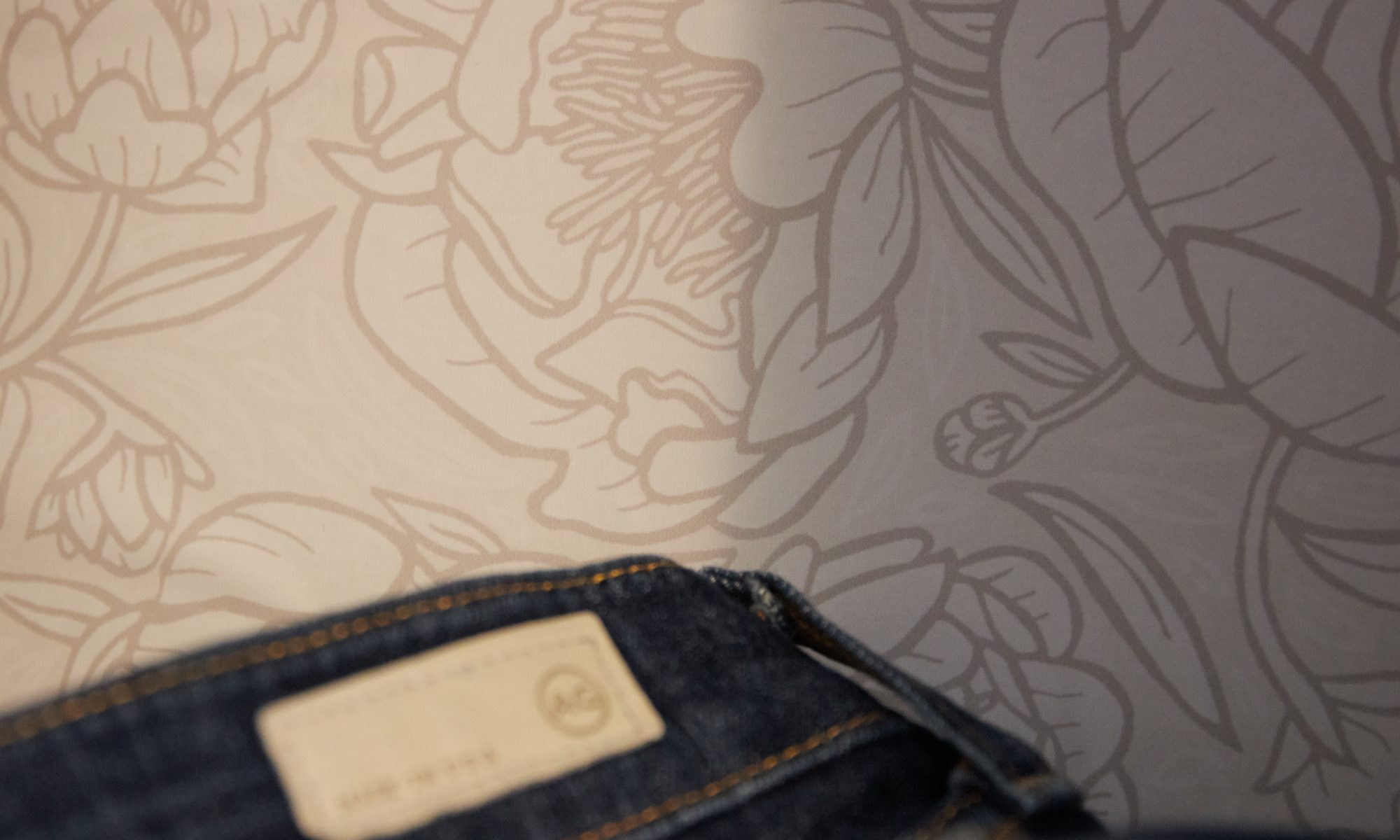 One of the great parts of our old apartment was that it had 2 fairly large closets for clothes, situated right next to each other in the hallway. Both were about the same size so we had a his and hers — done and done!

The great part about not having to share a closet is that it's okay if his closet gets messy, because that's his own business. And similarly, if one day I want to take everything out of my closet and re-organize it (because that's how my mind works), I don't have to make that an activity that takes up his whole Sunday afternoon, as well.

Now, in our new house, I'm finding the closet situation isn't quite so great. Well, I should clarify, the master bedroom has the worst closet of all three bedrooms. In short, it's just not big enough for the 2 of us. I could probably write at length about its other short-comings, but I'll save that for the day when we finally replace it, but for now we have to live with it — until I can execute on my dream closet.

END_OF_DOCUMENT_TOKEN_TO_BE_REPLACED

Before we became homeowners, I used to think of gutters as the things that ruined my bowling game and where my mind sometimes goes. Now I'm acutely aware of the areas of our home that allow water to run off and not cause damage to the house. And thankfully, it's one less thing on the to do list! #homeowneringlikeaboss

END_OF_DOCUMENT_TOKEN_TO_BE_REPLACED

A couple of months ago, we decided to get cafe shutters for our bay window. Even after deciding, I had a whole ton of second thoughts since it was a more permanent solution than drapes. Would it look weird?

Well, I thought, it can’t look worse than how this journey first began. END_OF_DOCUMENT_TOKEN_TO_BE_REPLACED

Well, let me re-phrase that: I'm thrilled we found our forever home so we probably won't need to move again for 30 years!

In all seriousness, things are going pretty well. The office is the next space to tackle as far as getting it somewhat together. I think the big elephant there (almost literally) is that the beautiful desk I bought off Etsy has not yet arrived.

And then there's the thing about our master closet. It's not great. It's a 2 foot x 5 foot reach in and that's not nearly enough space for both of our clothes let alone shoes and bags (most of which are mine but that's beside the point). We are using other closets in the house and have left the master one empty for the time being, but I think I've convinced dear husband to consider building a true walk-in by extending the footprint of the existing closet. This might be the first step toward building a true master bedroom suite with the attic space since I don't think we'll able to afford to do that for quite some time.

That's the real sour thing about all this.

END_OF_DOCUMENT_TOKEN_TO_BE_REPLACED

When dear husband and I were planning our wedding, the hardest thing after finding a venue (and getting married on a budget…) was finding a good wedding photographer that we could trust. As people who take lots of photos, we definitely know what we like and don't like. Thankfully, we ended up with more photos we liked than photos we disliked.

That said, having shot weddings and events in the past, I like capturing fun moments and not being in the way (don't get me started on photographers and videographers who block the view for the entire crowd of onlookers during a ceremony). The way I like to take photos is that you shouldn't really know I'm there. But I think that’s kind of easy these days.

The real tricky part lies in taking pictures of folks not doing something special but just being. Here are a few tips I have in case you are trying to make a good picture of another human:

And by "lit" I mean pay attention to lighting. Good lighting is imperative. The last thing you want to do is have a whole lot of dark photos that you need to tweak. Unless you are trying to capture someone's dark side, in which case, carry on!

That said, good lighting doesn't have to mean expensive lighting equipment. If you find your camera's flash is too much, try to redirect that light. You can literally put a rectangle mirror under your flash while you take a picture (there's a product that does this for you called the Lightscoop). This helps diffuse the light so that flash is not so harsh. Alternatively, take your portrait on a bright but overcast day and let a cloudy sky be your big softbox in the sky.

Everyone is beautiful in their own way and when you create a portrait, it’s about figuring out the best way to capture that. Makeup can be your friend; although, more so the kind that keeps you from getting too shiny if you tend to have oilier skin and not the kind that alters what you look like (again, unless that's what you are going for!).

Do keep in mind that even the beautiful people don't always look so great staring straight at a camera. Models are lauded more for creating angles with their bodies versus something inherent about their composition. This is when I think it’s totally ok to have some inspiration photos you like that you will try to capture. I have a Pinterest board of inspiration — whatever floats your boat.

Moreover, once you are inspired, it's important to use the right tool to facilitate the result you are after. If you have a zoom lens or interchangeable lenses, a good rule of thumb is to go higher than 50mm for individuals and go lower than 50mm for large groups of people. A lower number means a wider field of view which can distort lines and people's faces if you aren't careful; a good example of this is in the movie La La Land. As the camera at the audition pans in on Emma Stone's face, you'll notice something's a little off due to the distorting effect of the wide lens:

Every person is different and so every session will be different. What feels right for one may be terrible for another. If something you envisioned for your model doesn't work, realize that as soon as you can and move on. Don't force some photo trends just because it's in.

Similarly some photo trends need to die and you have my permission to let them die. Photo shoots on railroad tracks, for example, need to end; who decided that was safe?! And don't get me started on bad couples poses. I've seen engagement photos bordering on the obscene because of where a hand is placed during a staged kiss. When you are trying to create a portrait of a regular person, you generally want to avoid techniques that will be seen as gimmicky in the future. I generally try to avoid super stylized lighting or poses unless I'm working with an actual model who wants something unique; your average person will want to simply look their best in as many of the photos as possible.

Key takeaway: focus on presenting someone in their best light (literally) and don't be afraid to make changes and adapt in real-time if needed to improve the outcome!

The end of 2016 was rough. Like many other women, the outcome of the November election reflected the reality of the doors that continued to feel very much closed to me. The glass ceiling with the 18 million cracks in it suddenly felt more like solid lead — and it was poisoning me.

To cope, I decided to dive head first into photography in the coming year. Making pretty pictures won't change the world, but, for me, the act of going out to shoot soothes the soul and the post production definitely helps quiet the mind.

I bought a bunch of new equipment to kickstart that warm and fuzzy feeling about taking photos again. I submitted a sample of my work to a stock photo company and was accepted as a contributor. And then, like clockwork, I was fortunate enough to get the opportunity to photograph some Major League Soccer games both in New York and DC. END_OF_DOCUMENT_TOKEN_TO_BE_REPLACED

When I was younger, I learned the hard way not to buy cheap hand bags. I bought a bunch of these (including illegitimate knockoffs sold to me in a backroom somewhere in Chinatown — which I will never again do for so many reasons!) and they would never last.

Now that I'm older and (so I hope) somewhat wiser, I invest in handbags that will last me a while and put up with abuse. I take the subway almost every day of the week so bags I wear can't just look pretty but they really have to function, especially under stress. A bag I carry should be able to get bumped into by a hobo and brush it off! Not only that, it should be able to fit all the junk I need in a day (wallet, digital devices, makeup, etc). END_OF_DOCUMENT_TOKEN_TO_BE_REPLACED

Now that Labor Day has come and gone, I think about how I spent my summer and reminisce.

Much of the summer was spent in the city. As is always the case for me, I start to get tired of it and I need a change of pace to remind me why I call this gem of a city home.

We took on Coronado Beach which, due to the presence of mica, glitters like someone dropped a glitter bomb across the entire beach. Also notable were the donuts (and donut-like poptarts) at The Donut Bar.

Many years ago, when I was still new to digital photography, I started using Apple's software Aperture to manage my digital asset library. I've continued using Aperture, even after Apple announced that they were discontinuing it. For a little while, I refused to believe that they were ceasing support considering how much progress they had made with analogous products like Final Cut but it's truly over.

When I was in college (which feels like so many moons ago!), I took an Intro to Photography class. I took the class because, with the easy availability of digital cameras, I had already started taking a ton of photos but wanted to do it a little better. I didn't know what an SLR was (or what those letters even meant) and had no idea about all the different components you can manipulate to take a picture, all to different effect.

I think I ended up getting a film SLR (that's single-lens-reflex, by the way) camera for Christmas and using that for a while throughout the class but the exposure triangle kind of alluded me for a long time. It wasn't until I started using a digital SLR — with the abundant low cost tolerance for trial and error — that it finally clicked.

A lot of people ask me about what kind of camera to buy and use but, for most of those people, I think the question they should be asking is how they can improve the quality of their photos. END_OF_DOCUMENT_TOKEN_TO_BE_REPLACED